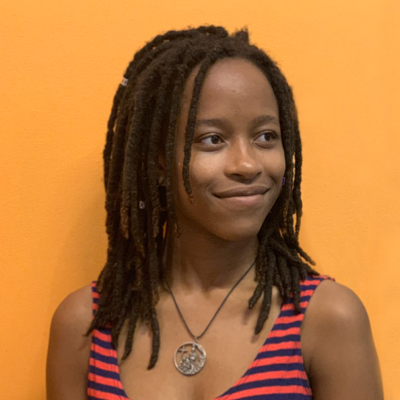 Khadijah is an aspiring film artist from the D.C. Area who was surrounded by art all her life. Experienced in many forms of visual art, whether it’s illustrating, painting, or photography, Khadijah’s long term dream has always been to delve into the art form that is cinematography and performance art. Living in the Nation’s Capital has given her an open mind on how to express herself and has also given her ideas on how to give back to her community.

A way that Khadijah is giving back to her community in the DMV area is working with other young aspiring artists at a Non-profit organization called Arts on the Block.

Ever since Khadijah was a child, she always admired pop culture and story-telling whether it was through books, television shows, or movies. She appreciates the communities that cinema creates for people like her and views the world of film and story-telling as an important human subculture. With that, Khadijah has the idea that, since she loves how great films move her emotionally, she would also one day like to create a story that will move others. She aspires to write, direct and produce films that represent people and young adults like herself, and help anyone out there feel less lonely when they view her art and listen to her message.

Other than art and film, Khadijah also has a passion for activism and finds being a humanitarian to be a full time job on its own. Khadijah considers herself blessed to be raised in a household of love and empathy where she got an early start at giving back to the world, such as joining a campaign with her family to end the war in Darfur and other African countries and growing up to give her voice and a helping hand in other causes like Planned Parenthood and Global Climate Change.

All in all, Khadijah Frye hopes to do whatever it takes to make a change in the world, whether it be big or small, and will continue to use art as a bridge to get her there.