ABOUT THE CLIENT
Temple Emanuel is the oldest Reform Congregation in Montgomery County. It was formally organized with 28 member families in August 1952, and affiliated with the Union of American Hebrew Congregations (now Union for Reform Judaism) in March 1953. Temple Emanuel engaged Rabbi Leon Adler as its first full-time rabbi in July 1953, and he continued to serve the congregation until his death 35 years later. In 1988, Temple Emanuel installed its second spiritual leader, Rabbi Warren Stone. This project celebrates Rabbi Stone’s upcoming retirement.

Originally built in 1958 with expansions and renovations in 1974, 2002, 2008, and 2011, the building today is a beehive of activity. School-age children study in Religious School, the Early Childhood Center, the Upper School. Adult congregants attend courses and a varied schedule of enrichment programs—weekdays, evenings, and weekends. A prominent alcove in the social hall is the proposed location for the mosaic mural.

APPRENTICE & STUDIO CREW DESIGN PROCESS
This project includes planning, design, fabrication, and installation of a mural art piece through a community-integrated process utilizing AOB’s apprenticeship model and fabricated in our Silver Spring studio. In addition to the artwork itself, investment in this project will result in business and design training for creative teens and emerging professionals, warm engagement for the congregation, and a positive ripple effect through the regional creative economy.

Our design team met the client team to learn about the intention and vision for the project. After this meeting and other creative direction, studio crew produced a round of initial design drafts and revised their options based on constructive feedback from their peers and AOB teaching artists. The design team presented their ideas at a second client meeting, which resulted a strong central theme and some requests for further revision.  As always, our design team is prepared to receive constructive feedback and to develop the design until they achieve client approval.

SELECTED ARTWORK
For Temple Emanuel, AOB is creating a 100sf elemental mosaic mural designed by Serena Feingold. Titled Loving Kindness, the artworks is meant to represent the connection between the earth and the cosmos and the role that humans play within the universe. The tree in the center – referencing the Tree of Life most directly – grounds itself in the earth and connects up the sky. The cosmo swirls above the sky, giving the design an expansiveness and connecting it to the largeness of the universe. Flowers grow from where people are working, putting energy and care into the earth and seeing the results.

This elemental mural is designed to incorporate the negative space of the wall in between design elements. Bands of striped color extend out from the center and hold space for Hebrew and English lettering to the left and right, which quote Micah 6:8. The striped bands of color reference the ark in Temple Emanuel’s sanctuary; the form and font reflect that of the ark and connect this mosaic to Temple Emanuel – and Judaism – as a whole. 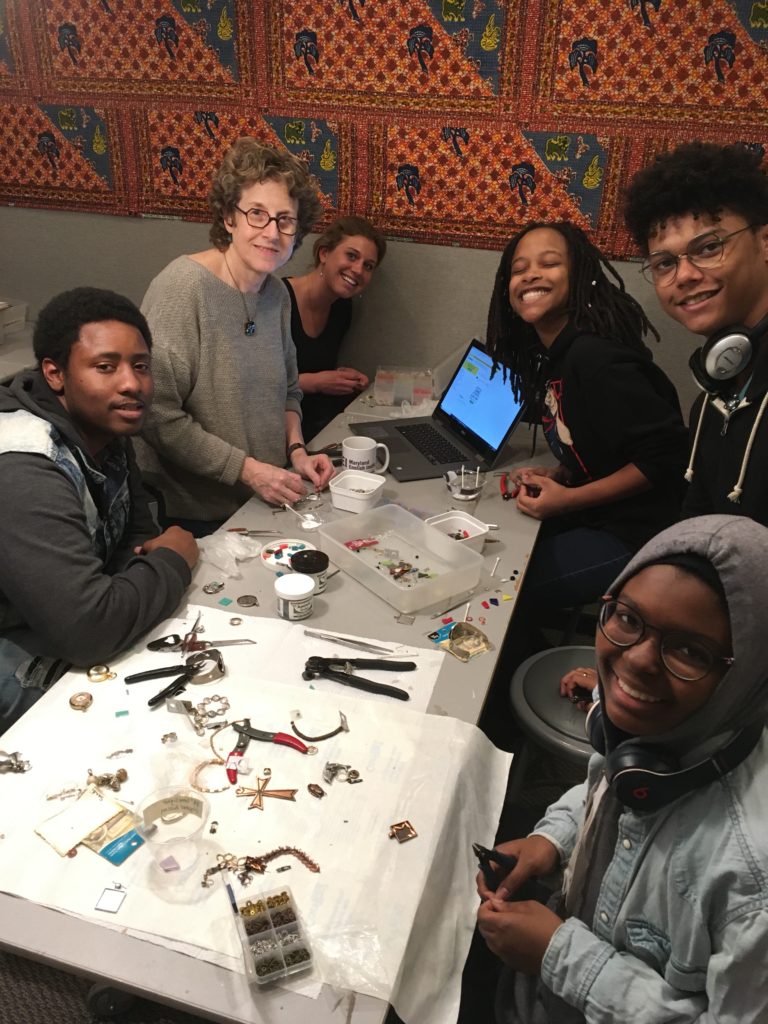 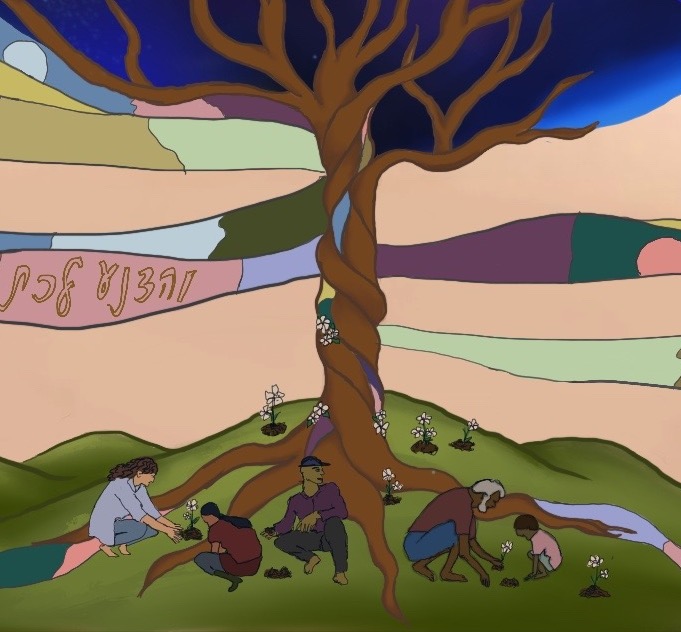